The Fred Arbogast Jitterbug was first made in the late 1930’s and is in continued production to this day. Originally made of wood, they are now made of plastic. A very common and popular collectable lure. Lengths vary from between two and three inches and wight is under an ounce. There is also a musky sized Jitterbug. A large variety of these lures is available and can fetch up to $100 or more for lures in good condition.

An ad for the Jitterbug says “A remarkable Action of Noisy Surface Bait Fascinates Fish and Fisherman. Try Jitterbug on a quiet night, due for a thrill. Its loud paddling action captivates and gets fish. Many enthusiastic letters were written.” 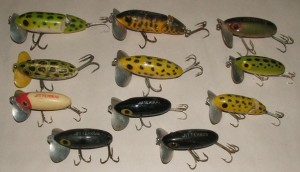 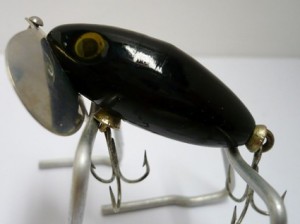