The Shakespeare Darting Shrimp is a fairly rare lure which was first produced in the late 1920’s. It is a jointed lure weighing just under an ounce and is about 5″ long. A Shakespeare catalog describes this lure as: “The Shakespeare Darting shrimp resembles the live shrimp in both action and appearance and is designed for both salt and freshwater fishing. It is jointed to permit a vertical action of the tail, created by a succession of sharp, quick turns of the reel handle pausing between turns. A slight twitching of the rod will produce this action, which is forward and upward at each jerk, doubling up and slowly sinking when line is slack.” This lure can fetch up to $400.00 depending on condition, box and age. 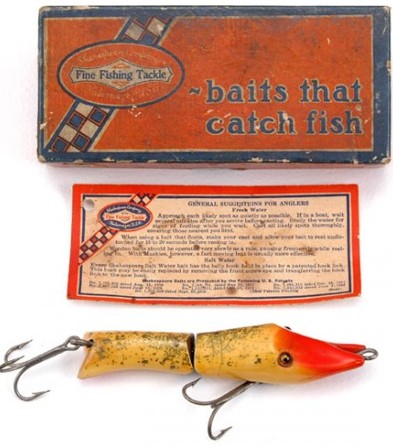